As of writing this, I'm in my early-to-mid-to-late thirties, just so you know the generational context that I'm coming from.
I grew up in the times before the Internet, the times when the big three networks were the only ones with Saturday morning and after-school cartoons, when you knew it was time to start the activities of the day once it rolled around to 10am and the familiar, yet annoying, Soul Train song came on. Yes, it was the salad days of G1 Transformers, G1 G.I. Joe, G1 Smurfs, and yes, G1 Thundercats. Back in those days, a soon-to-be pube developing Chief was looking at Cheetara with a curious eye, and chanting the familiar "Thundercats, Ho!" along with Lion-O. I was too young back then to realize that the beloved intro animation and song, as well as the aforementioned cry to arms was a much more polished bit of animation than the rest of the show, which in retrospect, was not great looking.
You may remember the same sort of thing with Voltron. The entire segment when Voltron is assembled ("Form feet and legs... Form arms and body....And I'll form the....etc"), as well as when the blazing sword gleaned forth from his lion-head fists, were beautifully polished pieces of animated artwork used in every episode. The fact of this and the reasons for it are obvious now, but not to an eight-year-old.
Plots were a lot simpler back then. Show a little interpersonal conflict, or minor plot point that illustrates character development, show the threat, heroes go to save the day but fail, heroes form Voltron and still fail, heroes form Blazing Sword and kill threat with one swipe, wrap up interpersonal conflict, show ends - easy as Smurfberry pie. Kind of makes you wonder why they didn't just go into every battle already formed as Voltron with the sword out and just take care of business. I guess that doesn't make for a good half hour of show.
Back then, it was the early days of the Nerd Generation. The people who cared were under 10. Transformers Nerds in their thirties were exceedingly rare IF they existed at all. The people in charge of creating this content didn't care as much as they should; they knew they were only catering to the stupid 10 year olds.
Times are a-different now. There are still stupid 10 year olds to please, but now all the thirty-somethings reminiscing about Cheetara's skintight outfit and Optimus Prime's energon axe (it existed, look it up) are saying, "Hey, what about us?" The kids who cared back then are the adults who care now and demand a little bit more than shallow plots and crappy filler animation.
Enter the new series of the Thundercats, now starting the fifth week of its run on Cartoon Network. I just watched the most recent episode, "Song of the Petalars", and I was truly moved. This episode acts as sort of a side-step standalone plotline from the main arch wherein the Thundercats come across a tiny race of plant-like beings called the Petalars. 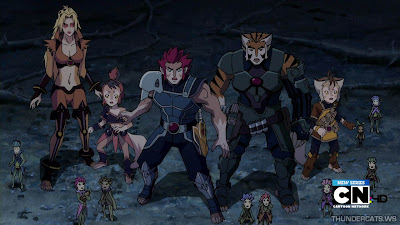 The real hook is that we find out that the Petalars' entire lifespan takes place over the course of one day in the life of a Thundercat. Birth, life and death, generation after generation, come into sharp view during this episode. Lion-O befriends a child Petalar named Emerich, becoming a mentor of sorts. Emerich's life perspective runs the gamut of a normally-aging being, from joyful child, to impetuous and rebellious teen, to brave young adult, to experienced grown man, to wise elder. Lion-O witnesses the changes as their journey progresses across the day, learning valuable lessons along the way about life and appreciation; he starts off as the teacher and soon becomes the student - it's quite clear the lessons of leadership that he takes away from Emerich that will help him on his overall quest.
I'll spare you the straight-up review except to say that this series is fantastic and this episode was beautifully written. Highly recommended.
My point in bringing this up is this: I no longer have the 10 year old perspective so I'm not sure if having an intricate storyline with a well-written dialogue is necessary for their sake. I know kids are maturing earlier these days and the Internet has desensitized them not only into knowing what a German Scheisse film is, but also into knowing what bad content is. So maybe weak voice acting and razor-thin plotlines in their cartoons will no longer fly; based on some of the new shows coming out and how they're done, the producers seem to recognize that.
However more importantly, I'm glad that the producers of what is essentially meant to be children's programming recognize that the adult contingent, the ever-growing demographic of youngsters of the 80's are tuning in to their product to reminisce; they want to pull us in and they can't get away with producing crap. You almost have to ask yourself, who are they really making this stuff for? Would I try and get my kid into the new Thundercats? Heck yes. Would I still watch it even if my kid didn't get into it? Hecker yes.
The young Nerds who grew up with me, watching the same plot week after week, the same basic characters saying and doing the same basic thing, are now the adult Nerds that are saying, "No way are we going to allow the wonderful shows that helped us form our personalities continue to be trite for the new generation of Nerds." But what is that going to mean when today's 10 year olds are 30? How is the evolution of show production going to have to adapt?
We've got years to contemplate that. In the meantime, Cheetara's outfit is significantly more meaningful to me.
Posted by TheChief No comments:

So apparently I'm a Marvel.

I guess that's what makes me a Marvel ;)
Posted by TheChief No comments:

[Please excuse some dated references, this was originally written in 2011]

Email ThisBlogThis!Share to TwitterShare to FacebookShare to Pinterest
Labels: Nerds

I'm still settin this bitch up.
Posted by TheChief No comments: